WCOFS is based on Regional Ocean Modeling System (ROMS), an open-source simulation of three-dimensional flows in the stratified ocean over a complicated slope topography and coastal shelf. The system can simulate both tidally and wind-driven flows, as well as upwelling of colder subsurface waters in summer months, instabilities and eddies of coastal currents, and both the transport and mixing of fresh water from riverine output. The WCOFS spatial domain, shown in the figure, stretches along the western coast of the North American continent from 24 N (Mexico) to 54 N (British Columbia). Extension of the domain south of the U.S. border is necessary to accurately represent the impact of long coastally trapped waves propagating along the shore in a northerly direction. Depending on application, the horizontal resolution is either 2 or 4 km (see detail below). Forty stacked layers are used in the vertical direction, following the topography of the ocean floor.

The system is comprised of two main components; an ocean circulation model (modeling the fluid dynamics of ocean conditions), and a data assimilation system (combining results from the circulation model with available oceanic observations to arrive at a more accurate estimate of present ocean conditions, which then becomes the starting point for a more accurate future forecast). 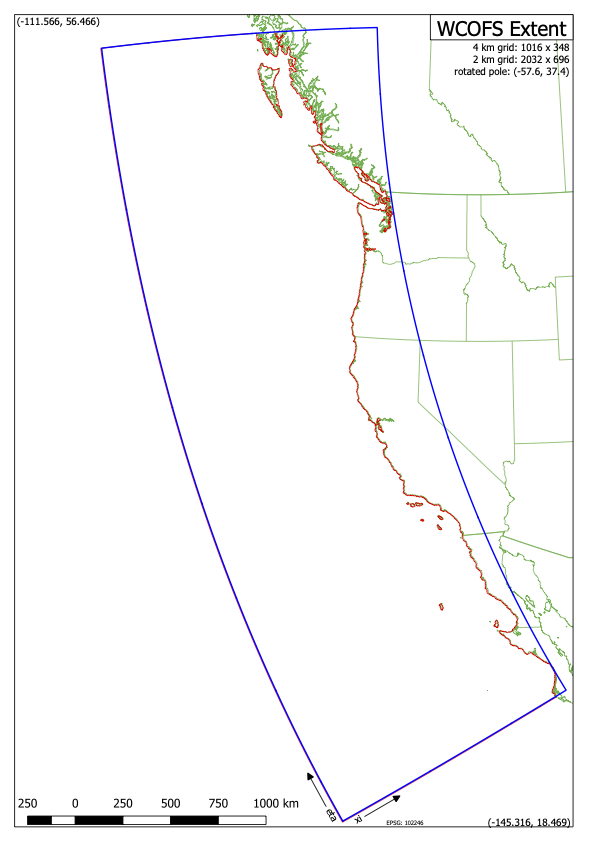